Worth seeing sights and churches

Free imperial city testimonials and more. In Schweinfurt there are far more sights to marvel at than some may think.

Directly on Martin Luther Platz in front of the imposing St. Johannis Church. It is one of the most important buildings of the German Renaissance from 1582/83; home to a museum (and galleries) since 1934.

Directly adjacent to the Georg Schäfer Museum and only a few steps away from Marktplatz; one of the city’s most important Renaissance buildings.
Acquired in 1431 from the Cistercian monastery Ebrach (Steigerwald region) as an estate, the Ebracher Hof burned down to the external walls during the Margrave War in 1554 (Second City Ruination).
It was only reconstructed in 1578. In the course of the following centuries the estate was utilized in very different manners. For instance, it accommodated an orphanage in the 19th century and an upmarket furniture warehouse after the Second World War. The Schweinfurt City Library will move into the Ebracher Hof in 2006 after extensive alteration and refurbishing measures.

Green connection from the Obertor to the Main River

This stretches from the Obertor [Upper Gate] to the Main River bank – with remnants of medieval fortifications. The City Walls with the Samtturm [tower] and the Powder Towers at the Lower Wall, the tower fragments of the White Tower pulled down in 1805 and the Wiesenhüter Tower as well as the moats are amongst the impressive testimonials to the Schweinfurt city history.

A brief stroll on the Gutermann Promenade affords an opportunity to see the Main River in Schweinfurt as close as possible. It is named after the Schweinfurt teacher and historian Hubert Gutermann (1892–1974). Here one also finds numerous industrial and technical historical monuments.

As in the Middle Ages, the Marktplatz [marketplace] is still a central and lively site of civic trade today. On market days, vegetable and fruit farmers from the Schweinfurt district still flock to the Schweinfurt Market to offer their products.
Market days: Tuesday and Friday 11.00–18.30; Wednesday and Saturday 7.00–14.00.
Visit the farmers market on Saturday, enjoy great shopping in our fashionable boutiques and department stores or just enjoy people watching from one of the downtown sidewalk cafés.

The historic Rathaus [City Hall], the city’s most significant and beautiful building, is located on the south side of the Marktplatz. It was built in the years 1570–1572 by Nikolaus Hofmann (Halle/Saale), and is regarded as one of the most important profane Renaissance buildings in southern Germany.
Indeed, elements of the Late Gothic period are also evident in the architecture. As if through a miracle, the Schweinfurt City Hall survived all disasters and wars over the centuries – from the Thirty Years War to the nocturnal bombing raids of the 1940’s. The city’s most-photographed building – which documents Schweinfurt’s heyday as an imperial city like no other structure – is still a central location of urban life.

The monument to one of the most famous sons of the city of Schweinfurt – Friedrich Rückert – is situated at Marktplatz. The poet and orientalist, whose birth house stands at the southeast corner of the City Hall, has overlooked the activity at the lively central square of Schweinfurt’s civic events since 1890. The monument was created by architect Friedrich Ritter von Thiersch and sculptor Wilhelm von Rühmann. Allegorical figures from his works (Geharnischte Sonette [Withering Sonnets] and Weisheit des Brahmanen [Wisdom of the Brahmans]) are situated at the feet of the bronze Rückert. 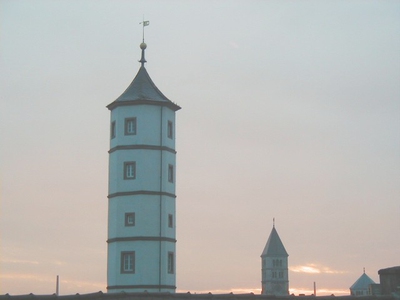 The Schrotturm [tower] has characterized the face of the southern Old Town for nearly four hundred years. Erected by Balthasar Rüffer III as the stairwell tower of a Renaissance house (1611–1614). At that time, demarcation to the surrounding countryside characterized by Catholic influence, the triple cupola dome referred to the political and religious independence of the Free Imperial City. In the 19th century the tower served the production of buckshot, and thereby not only received its name, but also five additional floors. It was completely restored during the course of the Old Town redevelopment in the years 1988–1990. Since then, the Schrotturm is once again a worthwhile visual attraction and is at the same time a picturesque gem with its environs in the middle of the town center.

The areas of the Schweinfurt Old Town situated east of the Marktplatz have been amongst the most beautiful refurbished testimonials to the medieval and imperial city past since the redevelopment measures in the 1980’s and 1990’s. The quiet small lanes, the re-laid cobblestone and the renovated historic residential buildings in the Zürch district convey an impressive Biedermeier idyll to visitors.
Craftsmen houses define the image in the area around Rückertstraße, Linsengasse and Burggasse. The name Zürch (Old High German: Viehweide [livestock pasture]) indicates that large areas for livestock breeding must have been located here hundreds of years ago. The adjacent northern area around the Krumme Gasse [Winding Lane] fascinates viewers with its winding system of lanes. This area is bordered on its east side by the remnants of the historic city wall.

The oldest architectural monument above the north side of Marktplatz. First written mention in the year 1237. The gothic choir was built in the beginning of the 15th century. In the following centuries the church was repeatedly worked on, and so a stylistic mix of different eras is visible. It has been the most important reformed church since 1542, and it serves as the parish church of the protestant congregation.
The interior furnishings can certainly be called opulent for a protestant church. Particularly worth seeing: The baptismal font with its original painting (1367) and the baroque pulpit (1694). It is one of the most important ecclesiastical architectural monuments between Bamberg and Würzburg.

Picturesque in the Zürch district, east of the Rathaus. The then Liebfrauenkirche [Church of Our Dear Lady] was consecrated here in 1412, of which the choir is still preserved to this day. The inhabitants of Schweinfurt heard the first reformist sermon on the steps of the former church in 1532. The church in its present-day form was erected from 1717–1719. It burned down to the ground in the Second World War and was completely reconstructed by 1953. Worth seeing: The Trumpet Angel on the elegant cupola dome formerly served the inhabitants of Schweinfurt as a weather vane. This is why Friedrich Rückert also wrote: "At last look I saw that he is not in such a good mood, since he trumpets from the city and his backside turns inward".

A hospital church associated with the Holy Ghost Hospital was built in the middle of the 15th century, and almost completely destroyed in 1554 (Second City Ruination). A new church was erected in gothic architectural style by the end of the 16th century. After the demolition of the old Holy Ghost Church, today’s building preserved in New Romanesque style was constructed from 1897 to 1902. Worth seeing: The main portal with the figure of King David and the depiction of the first Pentecost feast, the two side portals (the prophet Zachary and the baptism of Christ as well as the promulgation scenes) and the tower with a statue of Mary that is several meters high. Four altars are located in the interior of the church.

This Catholic parish church in the so-called Franconian Style (New Baroque) was consecrated in 1927 and – with the exception of parts of the enclosing wall and the tower – completely destroyed in the Second World War. A modern new building – significant in terms of art history – was erected in 1953 according to plans from Würzburg’s master cathedral builder Hans Schädel. Particularly worth seeing: The 250 sq m stained glass window from the Cologne artist Prof. Georg Meistermann, one of Germany’s largest church windows.