Schweinfurt – how the city got its name

Schweinfurt – Industry and Art: With this motorway sign visitors have been welcomed for quite a few years to a city which was known for many decades in Germany and far beyond as the Ball Bearing City. 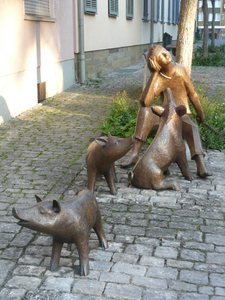 Schweinfurt is still an industrially characterized city. Yet since the beginning of the 1990s the former Free Imperial City has eminently changed, and has long since rediscovered points of its history which were somewhat forgotten over a longer period.

Today Schweinfurt is no longer merely an industrial city, but rather a city in which art, culture, remarkable architecture, science and tradition can be experienced.

The relationship of Schweinfurt’s inhabitants to their city’s name has always been a bit divided. Even the poet Friedrich Rückert, one of Schweinfurt’s greatest sons, composed a rhyme in the early 19th century:

You had Mainfurt, you had Weinfurt,
Since you stored wine,
But it’s called Schweinfurt,
And Schweinfurt shalt be thine!

Can one build a city,
to make it privy
to the name of a city,
which one can only sing with pity?

And so to this very day local historians have endeavoured to prove that the name Schweinfurt has nothing whatsoever to do with the not very socially acceptable swine. But whether that is so, continues to remain controversial.

According to the latest research efforts, the name Schweinfurt has evolved over the course of centuries from the designations Suinuurde, Suinfurt, Swinvordi, Sweinvort and ultimately Sweinfurt. It is only certain that at no point in time were swine driven across a ford in the Main River. This surely would have reassured Friedrich Rückert. But it will always remain an open question as to whether the name Schweinfurt actually has anything to do with swine.

But unlike Rückert, the contemporary Schweinfurt inhabitants deal with the name of their city with considerable imperturbability and humor.