The inhabitants of Schweinfurt repeatedly had to defend independence and often pay dearly for it.

As the city became a bone of contention between the prince-bishop in Würzburg and earls of Henneberg in the middle of the 13th century, heavy devastation resulted, which is known as the First City Ruination.

After the reconstruction, King Rudolf von Habsburg confirmed Schweinfurt’s status of imperial freedom in 1282. In the decades to come, all of the attempts from Würzburg and the Hennebergers to annexe the city into their own sphere of control also faltered. 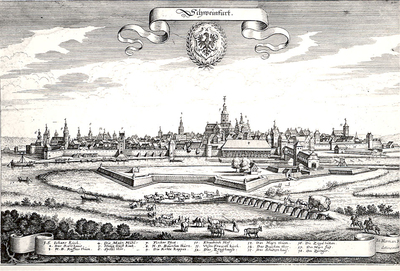 As the only Free Imperial City in Lower Franconia, Schweinfurt repeatedly retained new rights and preserved its sovereignty. The city converted to Protestantism in the middle of the 16th century. This was a daring step indeed, the inhabitants were surrounded by the Catholic territories of the Würzburg prince-bishop.

In 1554, a terrible war waged by Margrave Albrecht Alcibiades von Brandenburg-Kulmbach against the supreme religious foundations in Bamberg and Würzburg as well as the imperial city Nuremberg led to the complete devastation of the uninvolved City of Schweinfurt (Second City Ruination).

Only the Napoleonic reorganization of Europe in 1814 led to the loss of Schweinfurt’s independence. The city has belonged to Bavaria since that time. The fact that Schweinfurt did not suffer the fate of many other former free imperial cities is particularly due to the Schweinfurt inventors in the 19th century and the self-assured citizenry. They paved the way for Schweinfurt to rapidly become an important industrial city. A new chapter in the history of the city was opened.

1652 The first of its kind, the German Academy of Natural Scientists Leopoldina was founded in 1652 in Schweinfurt by four Schweinfurt physicians, Drs. Bausch, Fehr, Wohlfahrth and Metzger (Leopoldina, Nationale Akademie der Wissenschaften

1802 Loss of imperial freedom; the city becomes a part of Bavaria.

1883 Birth of the ball bearing industry