How did Schweinfurt get its name? 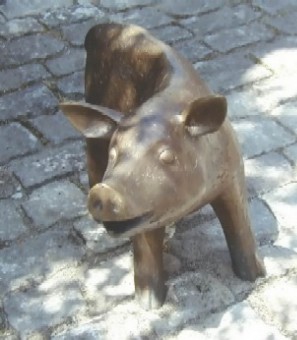 Historians argue that our city's name did not originate because pigs had been crossing the then shallow Main River, but that around the time Schweinfurt was first founded, members of the Germanic Tribe of the Suebians were frequently crossing the river here, on the journey from their original homeland in the Northeastern part of Germany to resettle in the South-West of Germany (known today as Schwaben, generally the area around Stuttgart).

Most Schweinfurters however are not willing to accept this theory. We would rather stick with the story of the little pigs crossing the river. After all, the German expression of "Schwein haben" - literally translated into "having swine", but meaning to be lucky - is much more to the point. Who can argue that Schweinfurters are not some of the luckiest people?

As to the little pig in our picture, he stands around a corner in Old Town Schweinfurt. Hope you find him on your next visit, don't forget to rub his belly and luck will be yours as well!